Anyone who is just getting into the hi-fidelity retro gaming scene will inevitably hear the word SCART for the first time and be confused. Sadly, the confusion only gets worse before it gets better.

SCART, Euro-SCART, or Péritel is a European wiring standard for a 21-pin connector: 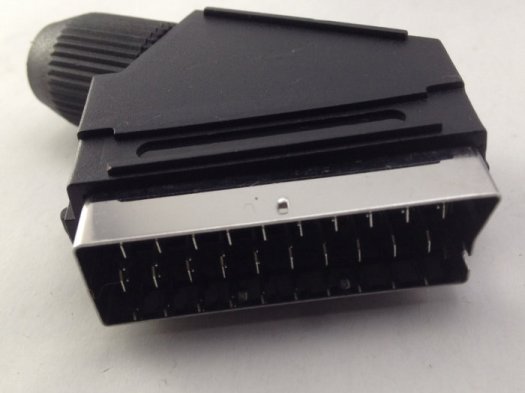 Unfortunately, a separate standard, known as JP21 or RGB21, exists for the exact same connector. They look and function identically, but the pinouts are completely different: 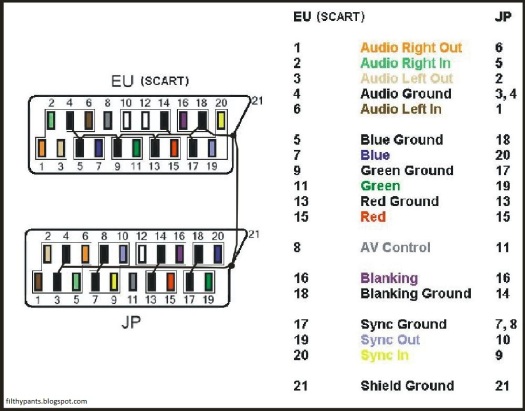 As you can see, the only pins other than ground that are shared between standards are the Red (pin 15) and Blanking (1-3V, pin 16) pins. That’s why if you mix your standards up, you’ll be seeing red (in more ways than one).

So which standard should you use? SCART is the more popular standard in the US (and the rest of the world aside from Japan I would assume). As I said, they are functionally identical, however cables and RGB devices generally support SCART over JP21.

First party cables for Japan-made consoles are likely JP21, though SCART versions exist for PAL versions (careful though – PAL and NTSC pinouts are different on Nintendo consoles and you can damage your consoles, cables, or yourself by interchanging these). Xbox Zero had an official SCART cable also.

Both of the major RGB cable makers, retro-access and retrogamingcables, offer SCART and JP21 cables; however, SCART is in stock more often and has more options. Retro-access also sells female-to-male and male-to-male cables that let you convert between standards.

The XRGB mini Framemeister was once the only show in town for retro upscaling. At one time, the device only shipped with a proprietary JP21 to 8 pin mini din cable. To compensate for this, retro-access made (and continues to make) a variety of cables that let you interface with the 8 pin port, regardless of the standard you are using. Micomsoft has since added an option to include a SCART version.

The OSSC, fast becoming the upscaler of choice for enthusiasts, has a female SCART input, so you will need a conversion cable if you are planning on using devices with JP21 cables.

The gscartsw at one time had a JP21 version, but this has since been open-sourced. If you want one of these switches, I have looked into building a few, but they are not cheap. The circuit boards cost about $90 each (when buying 3), the components about $40, and I haven’t even been able to find a quote on getting the cases made (not to mention the huge time investment to solder so many components). If anyone out there wants to pre-pay for the parts, I will build a few, but the initial investment is too much to build out of curiosity.

I Have the Wrong Standard

Good RGB cables are a big investment, especially if you have a lot of consoles and/or went with the more expensive multicore coax options. So if you went with JP21 as your standard, you are unlikely to switch to SCART at a later date. This can often leave you with the wrong type of cable.

You can always buy one of the aforementioned converter cables, but if you have a soldering iron and a little patience you can unscrew the cable hood and rewire it. This comes with a few caveats however.

If the cable is from retrogamingcables, or possibly other sellers, they may have used a PCB inside of the cable hood to make assembly easier and ensure better connections. If it is just a passthrough (no components on the PCB), you can strip a bit more of the cable and remove the PCB, though this will be time consuming. Secondly, if the cable is 21 pin to 21 pin, it is 2 way. Rather than rewiring all 21 pins, you can simply wire up the “IN” pins on the side you are converting, turning it into a one way cable.

Retro-access (and probably retrogamingcables if you ask) will also rewire cables for you if they were purchased from their stores.

I have open source designs for a few boards that will allow you to interconvert:

In the end, it doesn’t really matter that much which standard you use. If you are just starting out, go with SCART, but if you have an all JP21 setup, you can find ways to accommodate it without too much trouble.